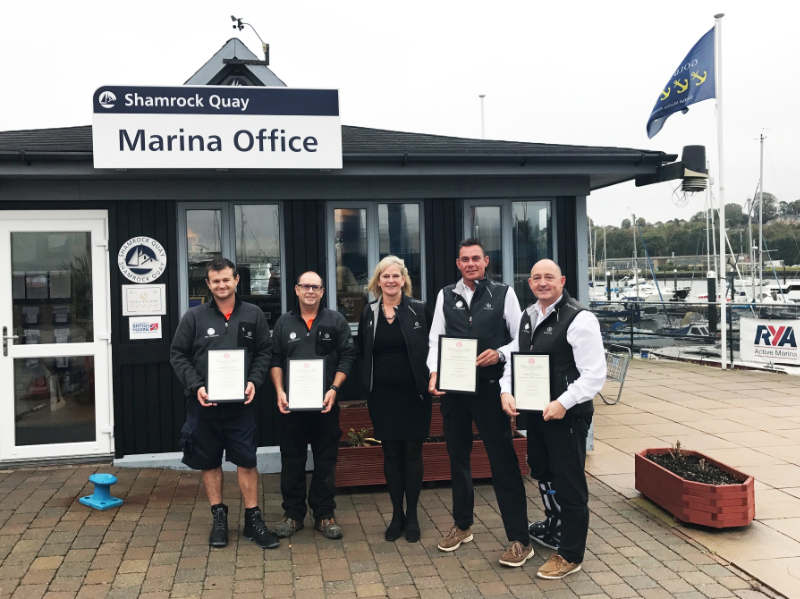 Four members of staff at MDL Marinas’ Shamrock Quay in Southampton have been recognised for their bravery after rescuing a woman who fell into the water at the marina.

Mrs Chrissie Cockburn, a member at Shamrock Quay, lost her balance and slipped from the pontoon into the water. The incident, which happened on 26 May 2017, was seen by Marina Manager, Jonathan Walcroft and Marina Supervisor, Barry Radband, who rushed to the scene, alongside Boatyard Supervisor, Andy Trim and Marina Operative, Colin Cool. Andy and Colin were first to jump into the water, quickly pulling Chrissie, who was facedown and unconscious, from the water.

In recognition of their actions to save the life of Chrissie, the team of four from MDL have been awarded with Royal Humane Society commendations. The Royal Humane Society awards are presented for acts of bravery in the saving of human life and for effecting successful resuscitations. Thankfully, Chrissie went on to make a full recovery.

Commenting on the incident, Chrissie said: “I am extremely grateful to my four rescuers for their swift actions. Unfortunately I was not wearing a life jacket at the time as I was simply walking along the pontoon from my boat, Ilkallia. I tried to steady myself, but misjudged the distance to the hose reel station and toppled into the water. I’m now fit and well and back enjoying life on the water.”

The Royal Humane Society Awards were presented to the team from Shamrock Quay by Lesley Robinson, Managing Director at MDL Marinas. Lesley commented: “We’re extremely proud of the team at Shamrock Quay. Without their swift action, the outcome could have been a lot different. Our marina teams all undergo extensive first aid and life saving training, but it’s very rare that their skills are put to the test in this way. It’s great to see that they all kept their heads and their training kicked in. Congratulations to Jonathan, Andy, Barry and Colin on their Royal Humane Society Awards, which are very much deserved.”